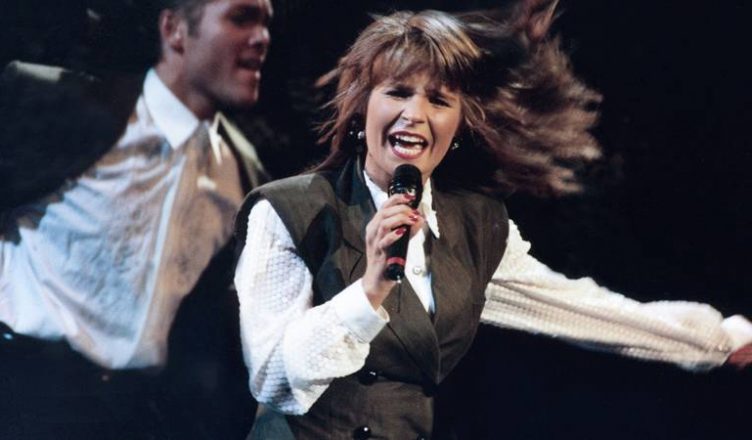 The quest continues. I’ve gone through all of the entries from Melodifestivalen during the nineties, I’ve also rated them and ranked them in this nifty little top ten list. It also includes 5 honorable mentions.

The nineties was a very scattered decade which introduced everything from Grunge to Eurodisco. Although not necessarily into the Melodifestivalen. However Swedish R&B shows up for the first time. There’s also more songs with an Ethno aesthetics. At the same time Melodifestivalen continues to produce a whole bunch of traditional schlagers. Two of them continues on to win the Eurovision Song Contest (ESC). Surprisingly none of those songs are on the top of this list.

Why: I guess the surprising thing here is that this song, that won ESC 1999 didn’t rank higher. The reason why is firstly that it’s too similar to ”Waterloo”. I also find the lyrics a bit too cliché. However, Charlotte sings the heck out of the song and it’s a solid schlager. So tenth place for you.
p.s. I also prefer the Swedish version.

Fun fact: The song eventually reached all the way to number five in the Belgian charts. Charlotte also released the song under the name Wizex, which was the Dansband she sang in.

Why: This song sounds a bit like your average Disney song. When the princess is walking through the village greeting people, dancing in the town square and maybe she’s buying apples. It is not strange that I make that reference Sofia went on to do the Swedish voice for Belle in ”Beauty and the Beast” and Odette in ”The Swan Princess”. I like this song for the cute chorus.

Why: As with Charlotte one might question why this doesn’t rank higher. Well, I just think that this isn’t as good as most other Carolas other entries. Still, it’s a pretty rock solid schlager and she sings great (as usual).

Fun fact: During Carola Häggkvist’s the Nacka transmitter was knocked out, resulting in a black screen for viewers. Urban rumors talked about sabotage, since Carola just had joined a Christian denomination called Livets ord.

Why: This is an upbeat song with a good Schlager costume. It also reminds me a bit of Orup productions. The boys, who before this usually worked in the choir for other artist finally got a chance to stand in front. I think that’s why they look so darn happy. That happiness is contagious. The song also has a great keychange.

Fun fact: They also recorded a version with english lyrics, it’s not as good but can be found here anyway: https://www.youtube.com/watch?v=qOH3WvDKDtY.

Why: I’ve gone to a few weddings were this song was played as the first dance, for the happy couple. That’s not strange. Although the song didn’t win it went on to receive a Swedish Grammy for ”Song of the year” which is the first an only time for a melodifestivalen song. And since it’s a beautiful ballad about the joy of loving someone Cecilia got a lot of bookings for weddings. That went on for years and years. I like the song because of its beauty, it’s also flirting with the Swedish traditional Visa-genre and folk music.

Fun fact: The group, One More Time, who wrote the song also recorded and english version of it which can be found here: https://www.youtube.com/watch?v=i5N_WvGczsU it’s worth a listen. 😀
The song also won Second Chance Contest that year.

Why: It was difficult separating this one from ”Det vackraste”, which one is better? In the end I rank this higher because of the performance. Nanne really attacks this song and gives it its personality. I also love how the lyrics suceeds in capturing the green little monster. It’s about envy and text is spot on. Well done!

Fun fact: The comedic radio show ”Rally” recorded their own version of the song called ”Fyllesjuk”. It’s about getting drunk on the ferry between Sweden and Finland; https://www.youtube.com/watch?v=-KxLagT40Y0.

Why: This song has great energy, it’s sung by Carola who makes every song sound better and it has that solid schlager sound with catchy chorus and epic keychange.

Fun fact: In the ESC-final Sweden tied with France for the win and Carola won the tiebreaker. And although I like Carolas song and am a swede, I personally prefer the beautiful french song; https://www.youtube.com/watch?v=PnxEBAoCZIw
There’s also an english version of the Carola song, called ”Captured by a Lovestorm”.

Why: I love the flirt with 50’s music, especially with the doo woop harmonies. At the same time it’s a traditional schlager. Jesper also has a great voice. On the downside, the lyrics aren’t really anything to write home about. Cheesy love stuff. But who cares. It still makes me happy.

Why: Perhaps I’m just being partial to the ethno sound of the 90’s but I also think that this song has a beautiful arrangement, especially in the chorus. Just listen to it. Aslo, Pernilla sings beautifull, it has that Swedish folk music sound.

Fun fact: Bonnie Tyler later recorded the song in english under the title ”Heaven”. You can listen to her version here; https://www.youtube.com/watch?v=5AcKUyDAkB0.

Why: I just love the arrangement on this one. It’s so swirly and light…I also love the Visa-elements in the song and the girls sing in beautiful harmony.

Elisabeth Andreassen – Jag ser en stjärna falla – A bit rockier than we’re used to hearing Elisabeth. I like it and the song is ok.
Wille Crawfoord – Missarna – The lyrics to this song makes it what it is a smart argument for the fact that ”failures” can turn into memorable and great things.
Cajsalisa Ejemyr – Du gör mig hel igen – Robyn wrote this. Need I say more?
Crosstalk – Det gäller dig och mig – A song for clubbing, in the 90’s anyway. A first time for Melodifestivalen.
Andreas Lundstedt – Driver dagg faller regn – A sweet ballad, written by  Alexander Bard, Ola Håkansson och Tim Norell. Kind of RNB-isch with Andreas (later in Alcazar) trying his wings. Most of all I like the poetic title of the song; ”drifting dew falls the rain”, or something…