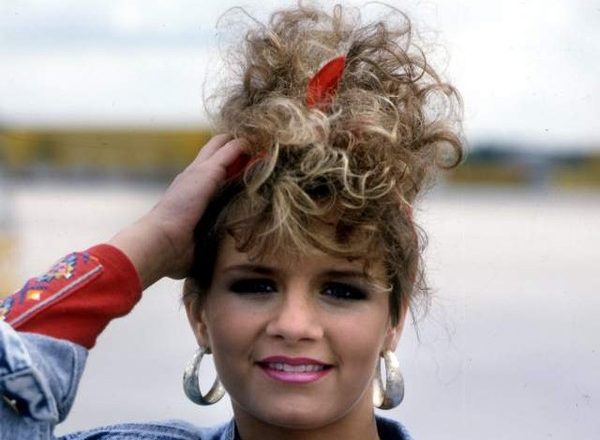 We all know the 80’s – big hair and bright colours. From a melodifestivalen perspective the 80’s was when Carola won many swedes hearts. But surely there was more?! For this post I decided to sit down and go through all the (other) entries from Melodifestivalen during the eighties, grade them and then compile a top ten list. Here it is.

Why: Firstly Tommy has a great voice, secondly it has a solid chorus, a guitar solo and good 80’s-hair. I also like how it builds up towards the end.

Fun fact: The choir consists of other famous Swedish singers. Also, Orup, who finished second that year, got so upset by his ”loss” that he ruined the big victory cake, that was waiting for Tommys in his dressing room.

Why: The big reason for this rather dull ballad ranking so high has more to do with the ”Boheimian rhapsody”-effect it has on many swedes. It makes us sing-along-long, high and very loud. It usually sounds like shit. But who cares? It’s fun! Apart from that, Tommy has a solid voice. At the time he was fresh back from London where he performed in the musical ”Chess”, by ABBA’s Björn and Benny, teaming up with Tim Rice.

Fun fact: When Tommy later performed it in the Eurovision final he suffered from a cold, which made it difficult for him to hit all the high notes.

Why: Ok, so Haakon doesn’t hit all the right notes in the first chorus… But who cares when the opera lady comes in and saves the day. I like this because of the fun mix between a solid pop song and the opera bit and it reminds me of ”Phantom of the opera”.

Fun fact: Haakon is originally from Norway and this was the second and last time he participated in Melodifestivalen. The song later became something of a hit in Sweden and the Opera bit that Elisabeth sings is from Mozarts ”The Magic Flute”.

Why: Well, these 3 boys were the first boys I ever fangirled about. Me, as a 8 year old girl just loved these cute boys and Louis (in the Blue shirt) was my favourite. Apart from that, its a solid schlager, nice verse and everytime it comes on it makes me happy, because of the jolly feeling-good lyrics.

Fun fact: The 1984 edition of the Melodifestival was pretty good. The opposite could be said for the international competition. In fact 1984 is one of the worse years ever, in my humble opinion. So, no wonder this song won.

Why: Firstly I like her Swedish-Finnish accent, it has a lot of attitude and Arja is like a sexy, Finnish vixen, tall and beautiful. The song is a solid schlager with a good melody. In the chorus I especially like the lingering vocal drop that Arja does.

Fun fact: Although Arja didn’t make it to the final she became the first winner of the international fan competition Second Chance Contest.

Why: I think this song has a great drive and a beautiful arrangement with lots of interesting things happening. It also has two solid singers; Kikki Danielsson and Elisabeth Andreassen. This is just great!

Why: During the eighties, year after year I was always disappointed that Lena never got to win the competition. She participated year after year with great songs and style. Always looking fabulous, in clothes she had sown herself. This was her last entry, from 1988. A rather lovely ballad about love. I like the arrangement and Lenas convincing interpretation of the lyrics. Also the bridge and key change (from 02.30) is just school book good- that’s how you do it well.

Why: A rather forgotten gem, that after the judges failed to see its greatness went on to be a rather big hit in Sweden, re recorded by Herrey’s who competed and won the same year (with ”Diggiloo Diggiley”). Unfortunately the live performance of the song wasn’t available. This hits all the buttons when it comes to eighties pop. A great melody with rather good lyrics too. Its about seeing the person you love getting ready to leave you – a bit like ”You’ve Lost that Loving Feeling” (by The Righteous Brothers). If the song somehow reminds you of ”One night in Bankok” (by Murray Head), it’s because Anders does a very distinct effort in both choirs. Here also in the lead with his sister.

Fun fact: The sibling duo (sometimes called Gemini) started their careers very early and the first time they competed in Melodifestivalen was in 1973, alongside their dad, Bruno and Ann-Louise Hanson. Anders also worked with Björn and Benny from ABBA as well as Orup and Niklas Strömstedt, forming GES.

Why: Carola is an undeniably great singer, already at 16 years of age. She exploded like a rocket and became a house hold name over night basically. A bit like Britney Spears, but 1983 and only in Sweden. Followers of Eurovision know that she would come back later, win the entire thing and develop in to one af the true Divas in the competition, and this was that journeys first step. The first great thing about this song is Carolas voice. Secondly it has a really catchy chorus that includes Mona Lisa and lastly the epic end-pose. A rock solid 80’s-schlager.

Fun fact: When it won the Melodifestivalen it got top scores from all the jury groups. Not even ABBA did that. Carola also did versions in German, Dutch and English named; ”Fremder”, ”Je ogen hebben geen geheimen” and ”Love isn’t Love”. According to rumours this was another song that Kikki Danielsson was asked to perform, but declined. She sang another song in the 1983 competition instead.

Why: This song has the perfect schlager chorus. Yes, indeed. I think it’s better than ”Främling” – which was the other song I gave the top score of ten points to. The biggest reason probably is that this has a better arrangement. Lots of stuff happening and then the song just explodes into the chorus. I think it’s just great, and Lena was robbed that year. She should have won! Instead Sweden sent some shitty song I can’t remember… (I can, I just don’t wanna. 😛 )